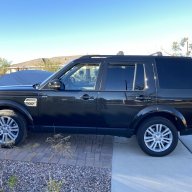 Purchased a beautiful LR4, one owner, many dealer services, but I have no idea what “services” were done, and the dealer will not share the service information with me since I am not the original buyer. Hence my question.
I have read in this forum that the water pump, thermostat, crossover pipe, and other plumbing is of concern. I also understand that there are some upgraded parts for enhanced cooling reliability. My vehicle has 94k miles on it, runs perfect and has no leaks. However I would like to be proactive on any maintenance - if I need to upgrade said items for continued reliability. The problem I have is that I do not know if this upgrade has been already done or not to my vehicle. (Ie, I have no idea what I am looking at/ looking for). Hoping the experts on this forum might be able to comment based on the pictures I will attempt to post. ANY thoughts or advice greatly appreciated. Thanks in advance for your suggestions and support.

That looks like the new style front crossover, so I’m guessing the front crossovers were replaced. I replaced mine at 52K and will probably do it again at 100K, as there is no telling how well the new parts are going to hold up.

No way to tell about anything else from the pictures.

You could ask your dealer if they would release the records by omitting any personal info on the prior owners, or you could ask specific questions - they might be willing to tell you if part x was replaced, etc. Or - if you purchased from that same dealer - see if the sales person might be willing to help get answers. I’m surprised the sales person you dealt with didn’t already have service records available for help in selling the car in the first place.
T

The new front "cross over pipe"(two pieces, upper and lower) appears to be much stronger then the old one. When I pulled mine off, I compared both, and the new one was much thicker. From previous post: "SO I was just looking at the new front pipes, specifically the lower "Y" pipe, and upper pipe, and both appear MUCH thicker then the old pipe, as well as the internal coolant flow area being smaller, due to thicker walls, just in comparison with sticking my fingers in and feeling. I can't fit my finger up into the NEW lower Y pipe, and I can EASILY insert my finger into the old pipes. These new pipes definitely look/appear more robust, as well as being one piece"

I am planning on doing this again around 165K, as well as the complete cooling system just as I did at 82K.

Thank you guys for your comments. I purchased the vehicle from a third party dealer, so that is why they don’t want to share the service information.
So it sounds like I have the the newer upgraded front crossover pipes.? Which means that they are not the original ones.. Does anyone have a picture of what the old pipes look like as compared to the new pipes? I am still not sure what pipes I should be looking at. Is it a manifold, pipe or a tube? I was looking at a schematic of the cooling pipe plumbing, and I am amazed at how many pipes are in this vehicle. With so many connections it also amazes me that it doesn’t leak.. (for the record- definitely not looking forward to any leaks!!). Is the rear crossover pipe as bad? Is the front more prone to fail? Or are they both equally as concerning? I will apologize in advance if I ask any dumb questions. Thank you for your comments.
T

The second picture is the top part of the front cross over pipe, and looks to be the newer design. It connects to a lower pipe, that you cannot see that splits off to a "Y" and connects to the block. The newer design is one "roundish" pipe, where as the older design was two parts that were glued together, creating a flat lip that ran the length of the pipe on both sides. If you had the older design, you would be able to see the flat lip on the side. I just replaced every coolant and heater pipe in the engine bay, and there are a lot. I took them off, then reassembled the complete cooling system on the floor of the garage so that I could use as reference when installing the new hoses. I also laid out all the new hoses in the same configuration so that I could easily determine the installation sequence.

The rear pipe does not have a newer design, as from what I read, was not prone to catastrophic failure.

I did my front and rear pipes at 82K, and at that time decided to just replace the complete cooling system (except the Radiator, as after talking to several independent's, and dealer service depts found out they do not have any problems with the rad). My plan is to go back in between 160-200K and do everything again, along with the radiator. I'll prob wait until closer to 200K depending on the time.

I'd just keep an eye on the coolant, then do the rear pipe at some point in the near future, then maybe all hoses/pipes/waterpump/therm at 100K then again at 200k if it were mine. At that time, since everything is off anyway, I'd just redo the front pipe as it's cheap and easy once you have the intercooler/intake off. I'd also do the Supercharger snout coupling, replace it with a solid one, and drain/refill the super charger oil. Then you are good for another 100K or so. At least that's what I would do. You just have to do what allows you to sleep at night. Others might not go 100K on the new pipes, but I prob will.

I'd also spend the time reading thru all of the cooling system threads on this forum to get familiar with the process. It's not hard if you go slow, take a lot of pictures, and lay the parts out on the floor as you take them off.
K

Other than maybe the front crossover I would suggest not to chase issues with a LR3/4. You will go broke lol. Address them as they appear.

timc930- thank you for your excellent assessment. I spent some time last night looking at the cooling system, and after reading your comments, I now better understand what I am looking at. Thank you for your thoughts! I agree with your strategy, take it slow, document parts, take lots of pictures, and stay organized when working. That will be my plan going forward.
MyLR4 really is a nice one and I do believe I will do my best to keep it for the long haul.. love those vehicles..
ktm525- also agree with you in that chasing issues you will go broke.. I think with Land Rovers you need to find that balance between proactivity and sensibility.. I guess it really depends on how much time one has and how much money you want to throw at the vehicle!
Thank you all for the excellent comments- this really is a wonderful forum!

timc930 said:
I'd also do the Supercharger snout coupling, replace it with a solid one,
Click to expand...

For a 2016, part number and vendor for that coupling?
Thanks!
You must log in or register to reply here.