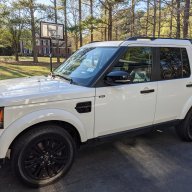 First I must say, this forum has been a wealth of information. For those who contribute, I really do thank you. I thank you for the detailed write ups and pictures on fixes some of us wouldn't know where to begin. With that, I had to make the decision this week that it was time for me to part ways with the LR4. If you look at my profile you will find I haven't been on here for a year yet. I will say, I bought the LR4 out of a bit of duress and for nostalgic reasons as I had an unforeseen catastrophic vehicle failure last spring. I had no inclination to buy a vehicle, so when it was time to look, I had no idea what I wanted. When I landed on the LR4 I was excited however, I felt as if I had one foot in and one foot out with it. I will say, in the time we had the LR4, I did drive the snot out of it. Bought it with 58k and sold it with 70k. No off-roading, too nice for me to take it off road, plus, thats what I have my YJ for. Since the automobile market is a bit weird right now, I didn't take a complete bath on the sale. What I had to pay in negative equity was probably cheaper than taking it to the shop for the maintenance I wanted done. ( If I took it to a dealer or Indy shop ). I know the crossovers pipes, water pump and timing chains were on my list of things to do. Currently no issues, but after reading this forum, felt it was something I had to get done. None of these repairs I felt I had the time to do myself, but could lead to a catastrophic failure. The strongest nail in the coffin for me was the undiagnosed transmission nuance when cold. It would shift hard. Even though this is a sealed transmission, yes I did check the fluid levels and made sure it was topped off. The issue persisted. This was not disclosed to me when I bought it, I should of taken the vehicle back and never accepted it, however it was full blown pandemic and I wasn't driving anywhere so it wasn't that noticeable until I took a trip to WV where it was much colder than NC. I think I have a post on it, but both the dealer and Indy shop said there were no codes and no faults so no issue. The Indy shop updated and reprogrammed the tranny, but it still persisted. When the vehicle was all warmed up, it ran great all gears shifted smoothly. Just getting it going in the morning, 1 to 2nd and 3rd to 4th would hesitate and or make a clunking noise. I disclosed this on the sale and have evidence that both the Indy shop and Land Rover dealer looked at it and were unable to find an issue. So other than the maintenance it needed, a potential rebuilt transmission would run me ~4k or more. I just don't like having things like that hanging over me.

I just happened to see a post right before I wrote this talking about the new Discovery's and the Defenders. I don't like the looks of them and agreed with one statement. The LR4 is the last of the older style, which is why I bought it.

So thanks again and be safe!
K

Happy trails. At least with the 6 speed hard shift was somewhat corrected with a software update.
You must log in or register to reply here.

T
2015 LR4 having a meltdown at random times. Related to High Speed CAN BUS. Need help!

Sep 18, 2021
BeemerNut
B
L
Can you identify this electrical part?