Steal of a deal on an LR4 with issues

Regarding the TPMS, if they are working as intended, you have to get the tire pressure up to the full recommended pressures to shut the warning off, and not a pound or two less.
L

ryanjl said:
Regarding the TPMS, if they are working as intended, you have to get the tire pressure up to the full recommended pressures to shut the warning off, and not a pound or two less.
Click to expand...

Good to know, I checked the pressures last night and they looked to be close enough but I didn't know that this system can be so picky. I'll get the good gauge out and test again.

Yeah, just wanted to make sure you tried the cheapest and easiest fix first!
L

Update: Found the source of the misfire. Cracked spark plugs are no good for a clean spark! New plug put it and she runs great even with me punching it, surprised by how this things hauls a$$. 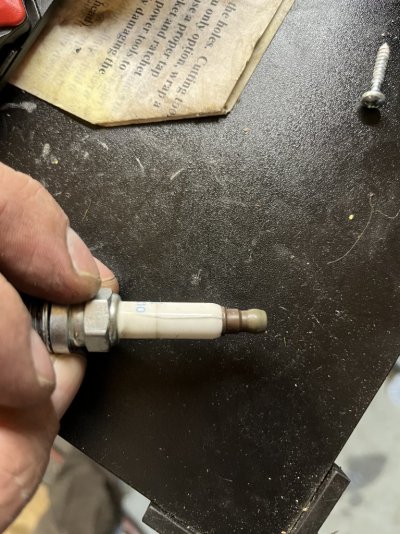 Also flushed the mainly distilled water out of the cooling system and put in 50/50 mix now that I'm confident I don't have any leaks.

TPMS issue has self resolved, but wouldn't be surprised if I see it again from what I've been reading, the system is temperamental. I believe the tires are nitrogen filled (green caps) I still have yet to verify pressures with my good gauge but may need a top up at the local tire shop.

Last issue to track down is the oil leak, seems to be coming from the back of the engine, not sure where exactly. Perhaps the oil is pooling in the valley between the heads and running down the back? No leaks in the front from what I can see.

slav rys said:
Perhaps the oil is pooling in the valley between the heads and running down the back?
Click to expand...

Can’t think of how it would be getting into the valley. You mentioned the possibility of a valve cover leak before, and that seems more likely - rear valve cover dripping down the back. Otherwise, maybe oil pan gasket.

You’re sure its motor oil and not transmission fluid or gear box?
L

jlglr4 said:
Can’t think of how it would be getting into the valley. You mentioned the possibility of a valve cover leak before, and that seems more likely - rear valve cover dripping down the back. Otherwise, maybe oil pan gasket.

You’re sure its motor oil and not transmission fluid or gear box?
Click to expand...

You bring up a very valid point, I don't know for certain that it's motor oil vs gear or trans oil, I just had automatically assumed this as it was the last thing I worked on, who's to say there wasn't a previous leak elsewhere. It seems to be dripping even after the car is off and sitting for a while, which would make it less likely that it's valve covers unless it's just taking it's sweet ass time running down the back of the block.
L

Oil leak is certainly coming from the valve cover(s), was able to view the leak from under the car following the exhaust pipe up to the heads, the oil also looks like fresh engine oil, not old gear or transmission fluid. I'll probably redo them the next time I do an oil change.

This has me thinking that's it would probably be good practice to replace the trans fluid and filter sooner than later, who knows when that was done previously. I'll have to get the filter ordered which I believe is part of the pan. I already have a dozen ZF8 bottles of trans fluid sitting around that I bought for other cars but ended up not using.

The truck is going to the body shop today to fix the cracked rear bumper and quarter panel, while investigating the damage, I noticed a couple of out of place cables coming from behind the rear left tail light, one is tapped into the tail light harness, there's also a set of RCA cables that's not plugged into anything. So odd, maybe this was used for a backup camera? The truck isn't currently equipped with one so perhaps someone did a retrofit, I was thinking of retro fitting one anyway so this wiring may be useful. 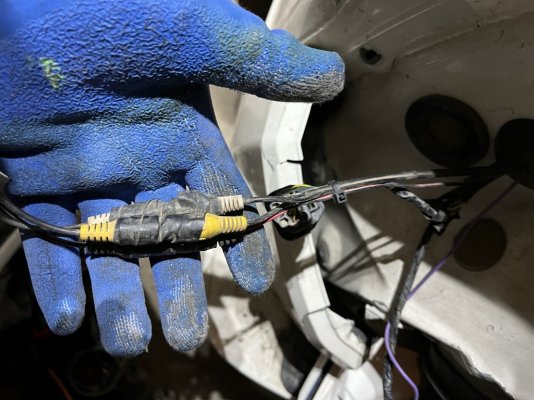 A couple of additional smaller issues to tackle, the spare tire winch isn't working, the steel cable is rolled up and zip-tied underneath with the spare tire sitting in the trunk and the radio antenna needs to be replaced as it's completely been torn off, I've seen a good write up on installing a new one.

I’ve replaced that winch, like everything LR it’s not cheap.

Get the separate trans pan and filter. Will make changing it much easier. Search here and youtube for videos on doing it.
L

I opened mine and it was all jammed up with sand and the cable was kinked pretty badly, I don't think I have a choice but to replace it.

You're right tho, it's like a $250+ part. This is one of the things I'm considering going aftermarket on since it's just there holding a tire. Tons of aftermarket options in the sub $70 range, I'll try one of these and report back on quality.
You must log in or register to reply here.