I'm putting some effort into diagnosing the P0087 Fuel Rail/System Pressure - too low issue, and thought it would be good to log some of my findings and diagnostics here for future benefit.
I've read some past threads where $1000's of dollars are spent with symptoms still persisting.

Symptoms:
Hot start, cranks a little longer than usual. Cranks fast, but takes longer to fire.
When cold, sometimes the rev's drop when coming to a stop, stumbles, and catches before stalling.
Runs good most of the time.

I've ran a tank of fuel system cleaner and another with a different fuel injector cleaner\lubricant. No luck there.
I've replaced the MAP sensor, no change.

I've been running some data logs to see what's going on. Logging every drive so I can get some data to compare between running fine, and under the restricted performance warning.

I'll post some charts of the data once I get a couple clean comparable samples, I didn't log the same parameters each run previously, so it's not a good set to compare.
Some observations:
1. when under restricted performance, there are a few instances of light load or throttle opening where the fuel rail pressure doesn't increase immediately it stay around the idle value.
2. when operating normally, the fuel pressure jumps consistently where there is a throttle opening.
3. fuel rail pressure always drops almost instantly when load is removed or the throttle is closed.

I'm thinking it's a sensor issue, sensor gets hot/warm from hot engine after parked for 30-60 minutes, and doesn't read correctly, load is applied, pressure doesn't rise, it throws code and sets restricted performance.

I understand with the correct diag tool, dealer or shop can put a manual gauge on the fuel pressure rail and run one or the other HP pump to test their actual performance. I have an appointment in 9 days, but I'm hoping to fix myself before then
N

I had very similar symptoms on 2013 LR4 last fall. Dealer said it was one of the HP Fuel Pumps, but they could not distinguish which one. I doubted their diagnosis because at high speed 70 MPH, all functioned well except high power acceleration. Ran a treatment of BK44 and all cleared up and has been working great for the last 5000 mi. All codes cleared on their own after running fuel system cleaner.
B

Thanks. I had a local Indy look at mine, and also figured it was one of the HP pumps not quite keeping up. I'm not entirely sold. Here's a snip of a recent run. Cold start ran fine, drove for 10 minutes. Turned off for about 10 minutes. Restart with "restricted performance shown". Drove for 5 minutes. Shut down and restarted, which cleared restricted performance. Did a few high load runs (3rd gear in S/M, 3/4 throttle so it didn't downshift, and logged fuel rail pressure, the high pressure sensor voltage, and the absolute load. Got the following data. Orange is Absolute Load (scale 0-100), Blue is fuel rail pressure in MPa, scale is 0-16 MPa. In most instances the pressure goes to 13-14 MPa (1900-2000ish) PSIG under load. There is an anomaly below, where load is over 80%, and pressure has flatlined. I didn't log enough info to see if this was stationary or moving or what. I think it may be when stopped at a stop sign, but load shouldn't be at 80%?. Anyway, maybe the 1800 to 1900 is not enough, as I think I read somewhere that spec is 2000, which would mean it's not quite meeting demand. Have been running some Lucas fuel injector cleaner in the last couple tanks. Going to try to find some BG44 local, or order some on Amazon before I order the pumps and dig into it. 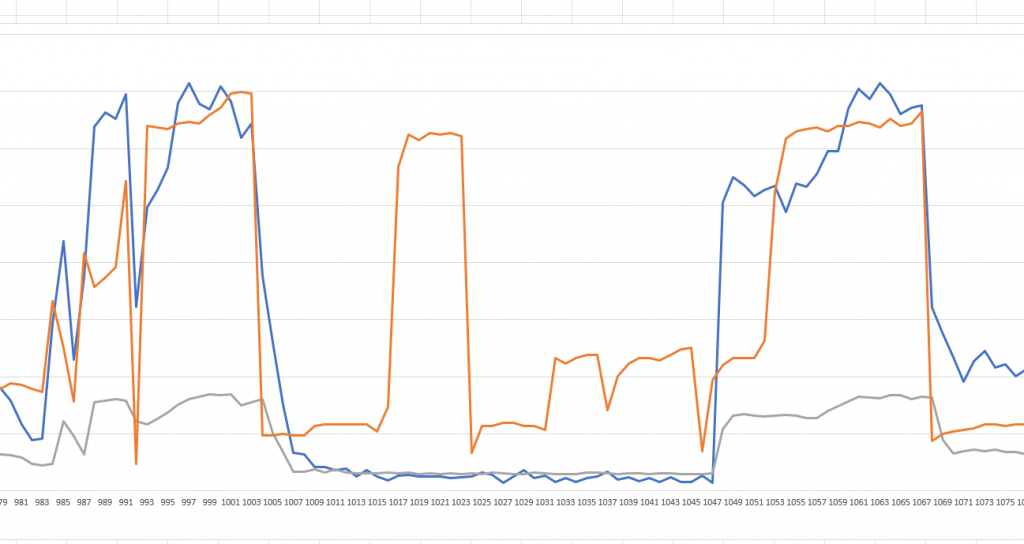 Maybe the fuel rail pressure sensor? I believe that’s a much cheaper/simpler fix to try than the HP pumps. Could also be a fuel injector sticking open, or the low pressure fuel pump failing. Are you getting misfire codes (I assume yes), and are they random, both banks, or on particular cylinders?
B

The shop tested the low pressure pump, and it checked out fine. No other misfire codes registered. They shop did say they didn’t have an actual gauge they could put on the fuel rail, didn’t have one with high enough range. I may try the sensors first, easier and cheaper. Are they dealer only? I have PN’s but no luck finding them anywhere.

I find it very odd that you would not have misfires with rail pressure dropping off as shown in your graph. The other thing that is odd is - how can you have such a high load without the fuel pressure to sustain it. The engine should stumble when fuel pressure cuts out that badly. You might try re-running your fuel pressure with both desired and actual rail pressure (assuming you have those fields availble on the V8), RPM, and Load.

Are you still getting the MAP sensor code?

As for the rail pressure sensor. I think it’s a bosch sensor - I assume it’s this part, but I didn’t confirm: https://www.fcpeuro.com/products/land-rover-fuel-pressure-sensor-bosch-aj812513#description.
B

Thanks for the input, I did have rail pressure desired, but it’s a voltage not pressure value and it was pretty much a flat line. I’ll run it again with rpm and vehicle speed, I the more values I log, the longer between data points so I was doing just 4 last time to get better resolution.

I have the V6, so maybe different values are available, but my GAP tool has a field for desired rail fuel pressure in pressure units rather than volts.

In any event, you can adjust the scale for the graphed units individually, so you can get whatever resolution you want. When you are looking at the graph on your phone/tablet, you’ll see the multiple y-axis scales for the different plotted values. Just touch the scale (y-axis) for the values you want to adjust (the selected scale will then be hightlighted), and then pinch to shrink or spread to expand the values. You also can select or hide each graphed value by clicking the upper right hand corner of the screen (“custom select”) to pull up a selection window.

I am using an iphone here, so might be different on android or other platforms.

Thanks, I'm using a cheap Icarsoft tool, so I don't have that much functionality. We've picked up a 2011 Audi Q7 as a second vehicle, and I've decided, against the advice of my local mechanic (he suggested burning it), to replace the fuel pumps on the LR4. Going to DIY. Looking for the parts, I've found several suppliers, and all have different LR part number references.
The Bosch 2196447, seems to be more common, those two sites are not listing a LR part number cross reference however. Anyone know the difference in the LR part numbers?
Thanks

DIY: Remove RH wheel well liner and skid plate if you have one for easy access. Depressurize the fuel system first from the top fuel rail union, 17mm wrench and rags. That's really it. Refer to the workshop manual for torque specs. I posted links to DL the workshop manual in other posts.
You must log in or register to reply here.