Would you buy this LR4? 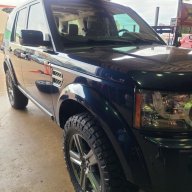 mm3846 said:
The timing chain may never have to be replaced. It comes up a lot more often on forums than it does in real life. Frequent oil changes prevent the issues that wear the guides out. Plenty of people driving these motors with 200k on them on the original parts.

The control arms are a wear item. at 55k miles, they shouldn't need to be changed. that's a 75-100k depending on how hard the truck was driven and the surface it was driven on.
Click to expand...

I have come to this conclusion myself, knock on wood. I have a one owner 2011 (well, I am #2 as of a month ago) with 122k miles and it was serviced at LR dealerships since new. It has never had an issue outside of scheduled maintenance other than normal wear items like brakes and tires, until the front left air strut started leaking overnight, which I replaced myself this past weekend. Yes, it is still on original cooling system AND control arms! The timing chains are quiet and everything except the Bluetooth phone connection works great. It was driven by a woman/stay at home mom in Florida and Texas. I don't believe it ever left the pavement.

I am going to have the cooling system proactively replaced (water pump, crossovers, hoses, etc). I have a quote for about $2,400 from a LR specialist indy here in Dallas (thoughts on that price?).
M

That seems like a great deal, even with the back and forth.
M

I have a '13 with 119k miles that need the control arms replaced, but it drives great. Never been off road.

mm3846 said:
The timing chain may never have to be replaced. It comes up a lot more often on forums than it does in real life. Frequent oil changes prevent the issues that wear the guides out.
Click to expand...

I don’t know a whole lot about how frequently the timing chain issue arises, but my understanding of the timing chain guide problem is that frequent oil changes would not likely prevent it. The tensioner had a steel piston pressing up against the back of the aluminum guide rail, and the piston being a harder material would simply wear through the backside of the softer guide rail. So, yes, oil changes might reduce the friction some, but the pressure of the piston against the rail plays a big part in the wear scenario here (there isn’t a whole lot of lateral movement between these parts to my understanding). It doesn’t seem like oil changes would have any effect on the pressure exerted by the tensioner piston against the rail.

The problem was frequent enough that LR redesigned the parts, and they failed out of warranty for enough people to generate a class action (although the settlement seemed a bit underwhelming).

I don’t mean to overstate the problem, but I also don’t want to see the OP ignore the risk either. Not sure what repair costs are in Dubai, but the cost of timing chain replacement here in the US is no joke. People have reported quotes of $5K-10K if I’m not mistaken.
K

It's not a black/white issue. If the tensioners simply failed due to poor design there would not be 200-300k mile examples running around with original tensioners. My working theory is frequent oil changes and run premium top tier fuel.

Which brings me to a question. When the knock sensors detect pre ignition is the timing delayed mechanically whough the camshafts (VVT) or electronically?

Not sure if it is worth mentioning - but the manufacture date is December of 2012 - which I imagine likely means it missed out on a lot of the updates that were made to models manufactured in 2013..

LRMore said:
Not sure if it is worth mentioning - but the manufacture date is December of 2012 - which I imagine likely means it missed out on a lot of the updates that were made to models manufactured in 2013..
Click to expand...

Back then there weren't many LR4's sitting on dealer lots. But you could easily order one exactly as you wanted it and delivery was about 8 weeks. We ordered our red LR4 in February 2013 and received it in early April 2013. Now it takes 4-6 months if you order a 2022.

I bought a 2013 LR4 with the same miles in May for 25K and feel like I got a bargain. HSE package with same interior. I had it checked out by local Land Rover dealer and the car has been solid. I love it. I sold a 2015 Range Rover Sport Supercharged to buy this for more room and more off road options and like the LR4 better for my use. I'd buy it, you wont be sorry.
You must log in or register to reply here.

Used Vehicle Inspection Items and Would you Do This?

L
Can you identify this electrical part?